A few weeks back I got an email from Steve in America, asking if I would shoot his proposal in London. Before this, I’d always turned down proposals as I thought they would be super stressful, but something about Steve’s email made me say yes. So, here’s Caitie & Steve’s London proposal story! 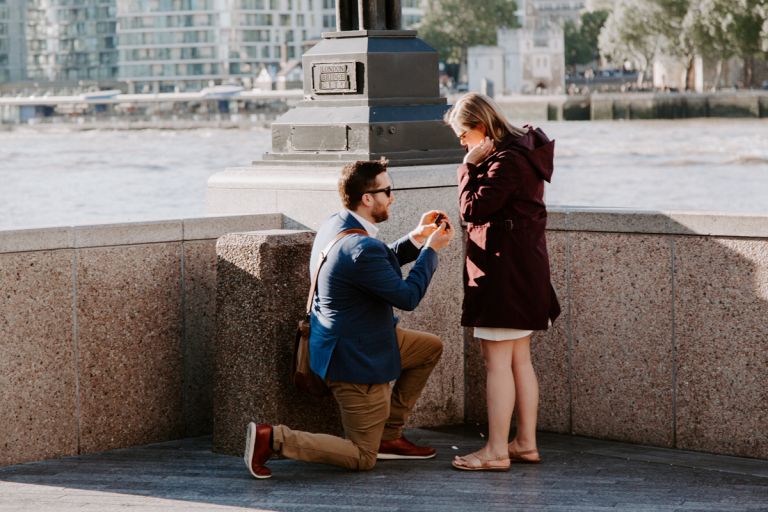 Steve is a news anchor in Colorado where they live, and met Caitie, a teacher, while doing a story. She just turned 30 and they were taking a trip to London, a city close to her heart. This is where I enter! Steve wanted a Tower Bridge proposal, so we got to planning the moment. On the day, we were live sharing our locations on WhatsApp to make sure we knew when each other had got to the agreed meeting place. 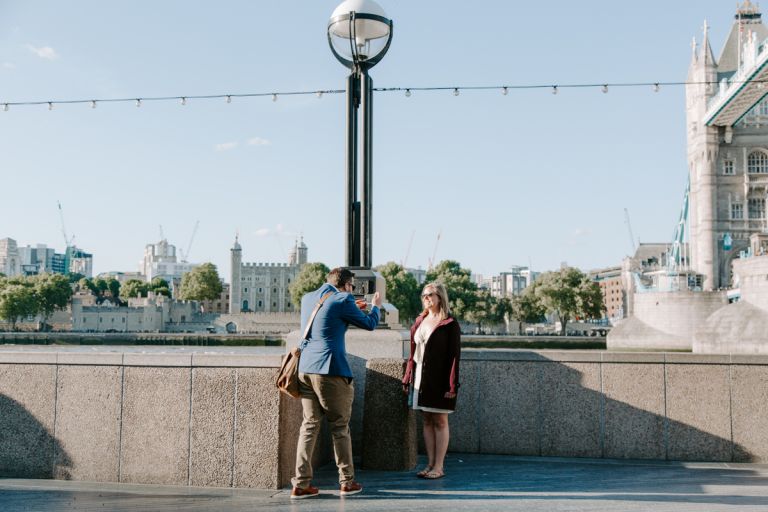 I had some crazy butterflies in my stomach on my walk there, so I can’t imagine how Steve felt! All was going well until I noticed his live pin hadn’t moved for a while. Trusty London Underground.. there were delays on the tube. As I nervously waited, Steve was nervous on the tube!

Finally I saw them moving again and my heart was racing as I saw they were crossing Tower Bridge. Luckily, the area was so busy I could hide in plain sight, just blending in as a tourist taking photos. 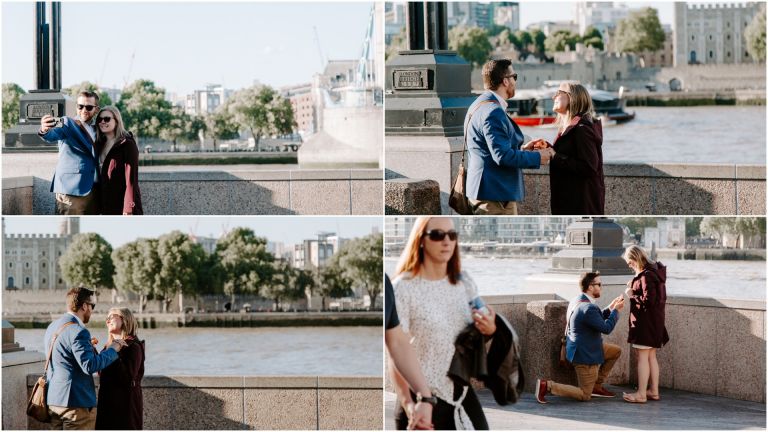 Steve took some selfies with Caitie and then got down on one knee. As the people around us started to realise what was happening, they started clapping and Steve took a bow which was really sweet. I gave them a second for a reaction, then went over to say hi. Clearly Caitie had no idea what had just happened, and who this English girl was! 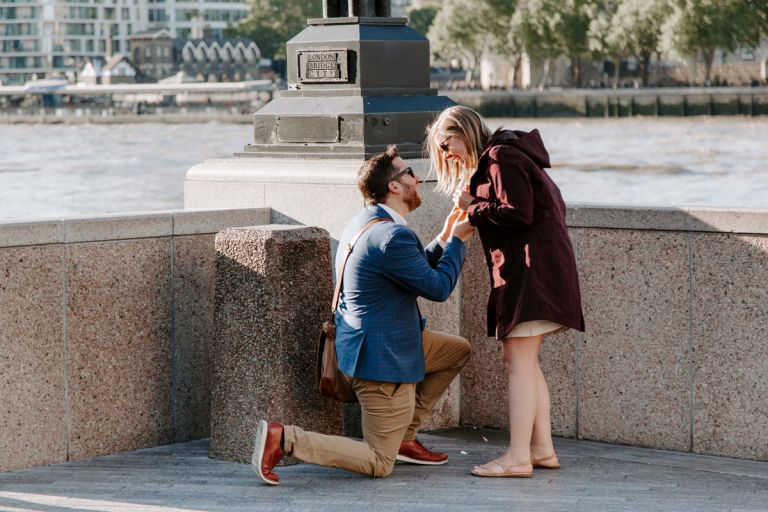 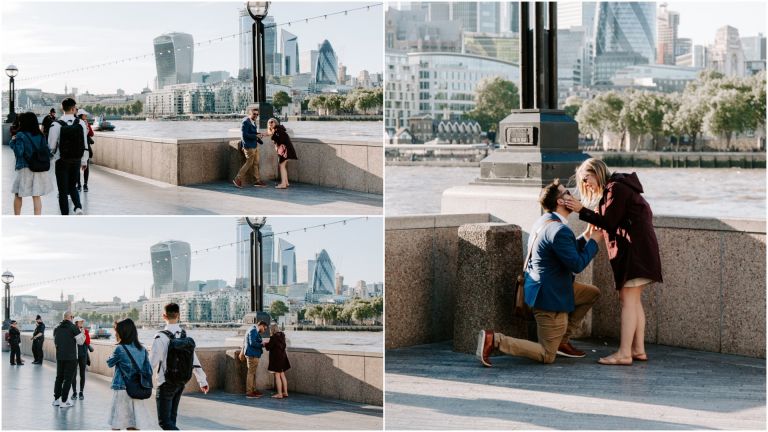 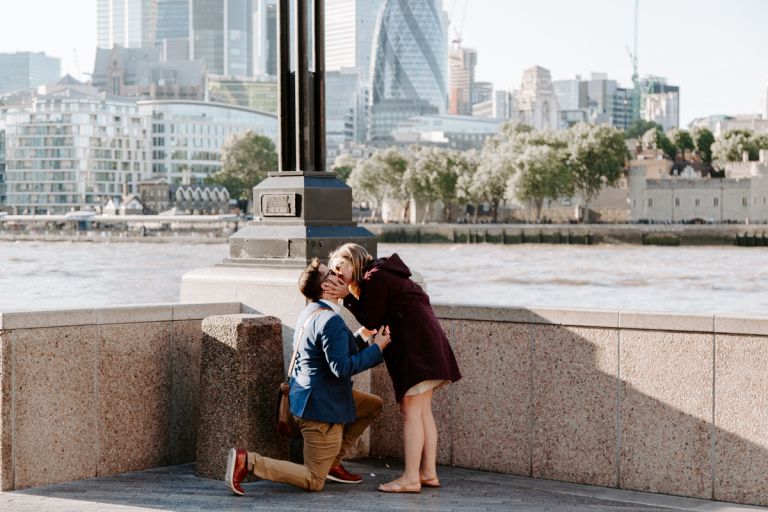 I took them to the nearest pub to get a drink to calm the nerves and raise a toast to the newly engaged couple. Then, we took a stroll around the area to get some engagement photos. 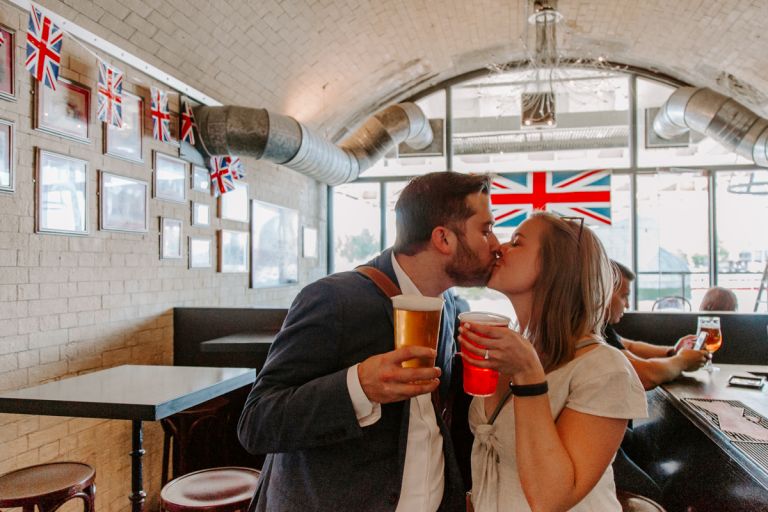 We chatted about their life, America and what they had planned here. I enjoyed getting to know them so much, and showing them the sights of the area! It was so lovely to meet a couple from across the pond and compare lives. 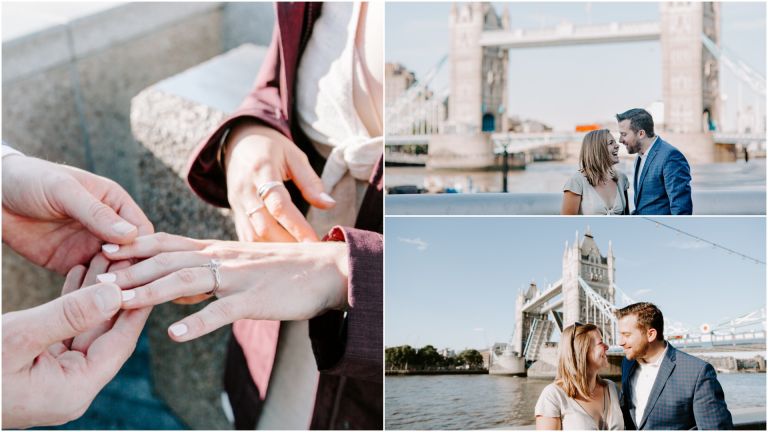 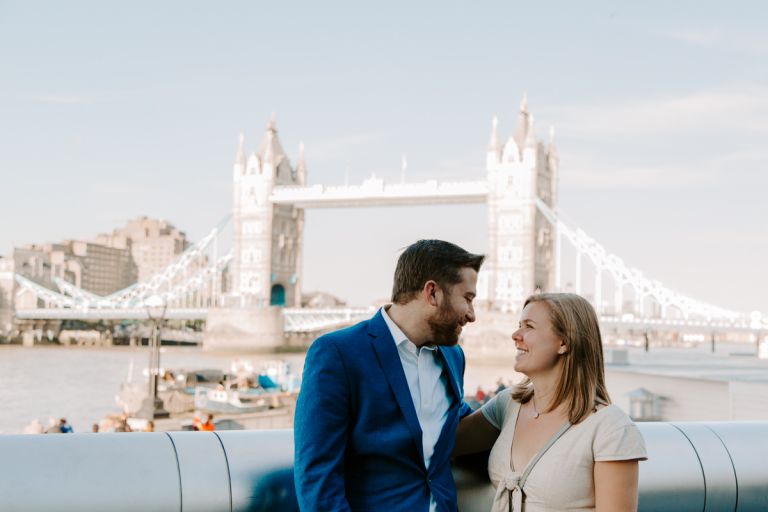 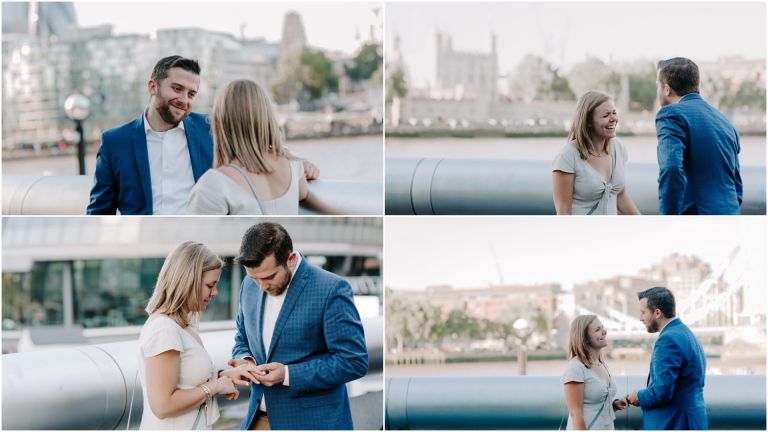 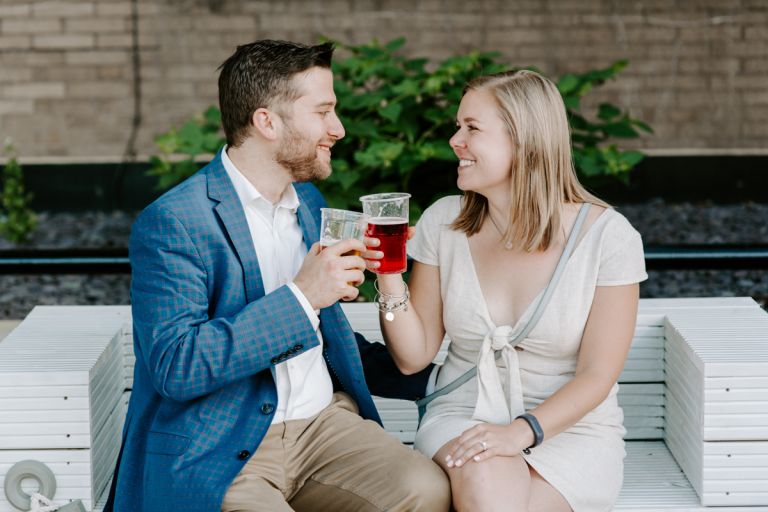 We walked towards the Shard as Caitie and Steve had dinner booked there. We took a stroll through the pretty Hay’s Galleria and just had to make use of the British icons there: The London telephone boxes. I came home absolutely buzzing about what a great evening it was and how amazing it was to meet these two. 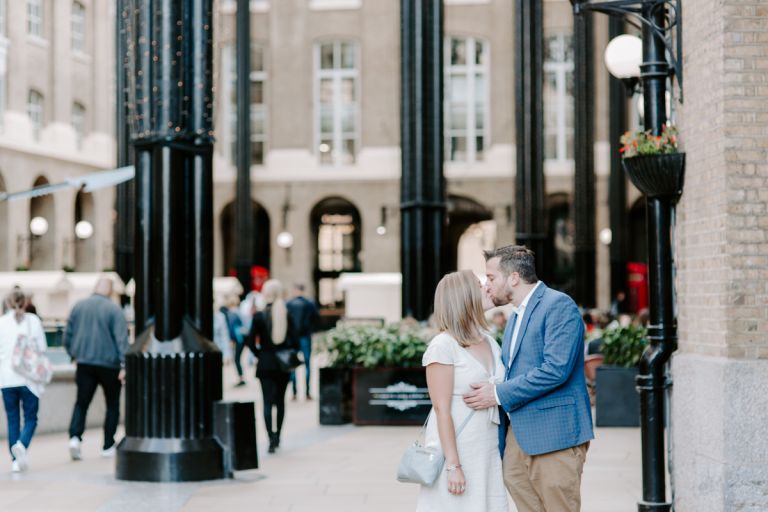 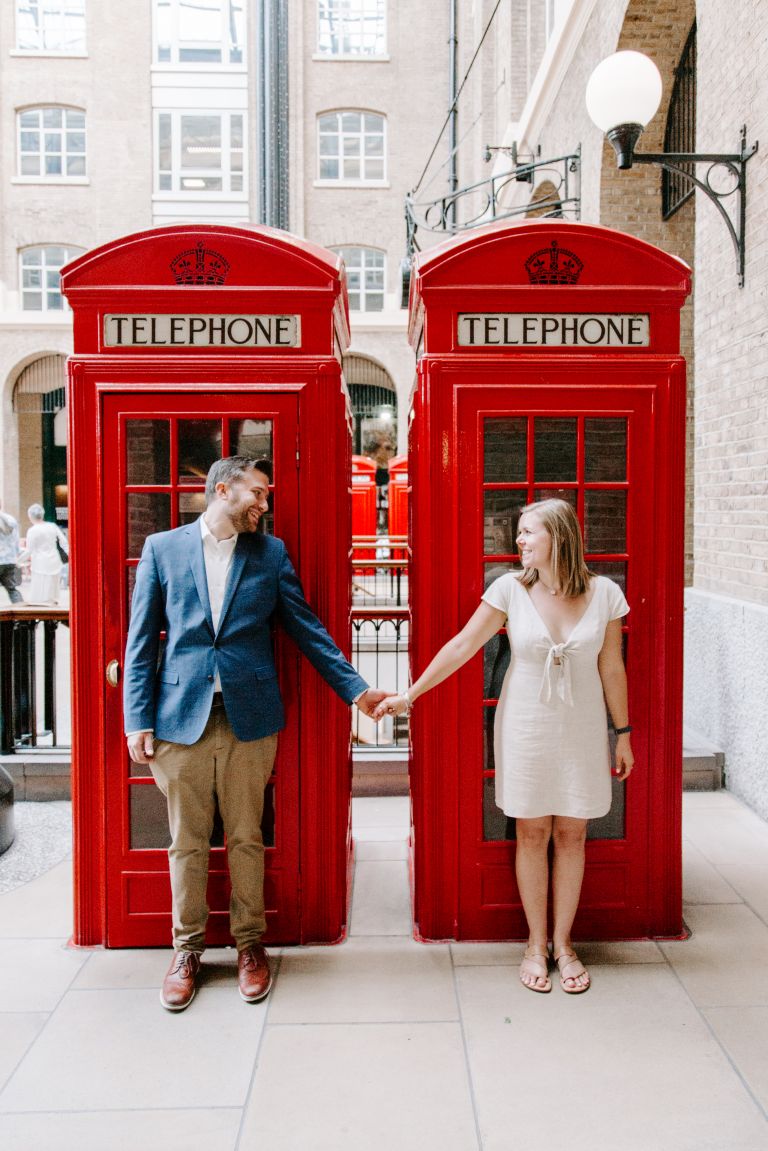 A week later we met for a drink before they flew home to Denver. It felt like we had known each other for years! Wishing you both a lifetime of happiness 🙂 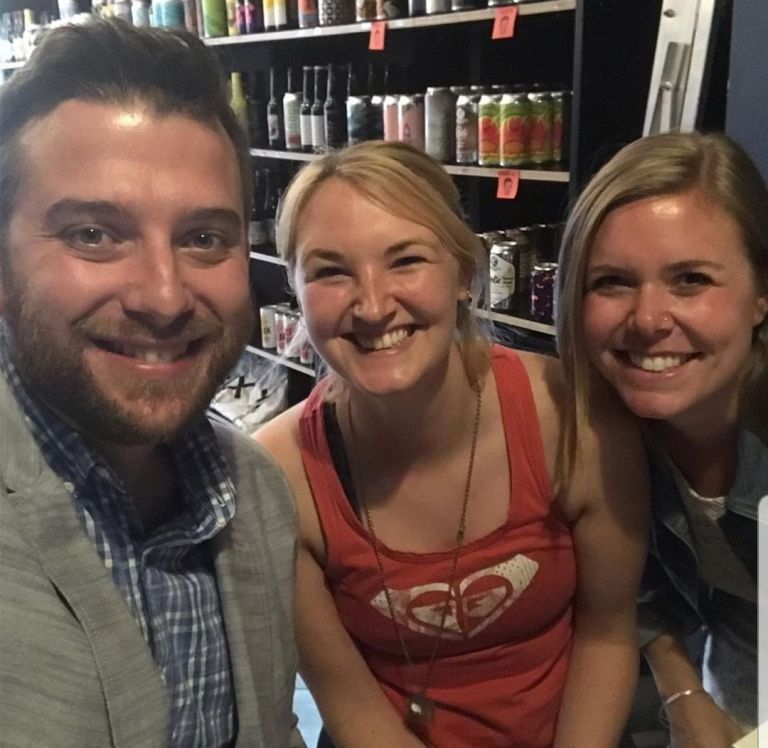 What is cool is Steve’s colleagues featured their engagement on the ‘Good News’ spot they do. You can see it here on Youtube!

If you’re planning a proposal and would love me to capture it, do drop me a message!

Update: I am so excited to be flying to Colorado in 2020 to shoot Caitie & Steve’s wedding. Amazing!