This week’s London wedding has been under wraps since September and I’ve been patiently waiting to share it with you. The reason is it’s been published in Rock N Roll Bride magazine this week! It was one of my professional goals to be published in Rock N Roll Bride so I am super chuffed! And what a special wedding to share with you. Grab a coffee and settle in for Jo & Liz’s colourful San Junipero inspired One Friendly Place wedding.

Jo and Liz got married at the STUNNING Woolwich Town Hall in south London. From the outside it doesn’t look like much, but inside is one of the most beautiful town halls in London. As a London wedding photographer, I’ve wanted to shoot here for so long! The pastel pink atrium is a photographer’s dream. 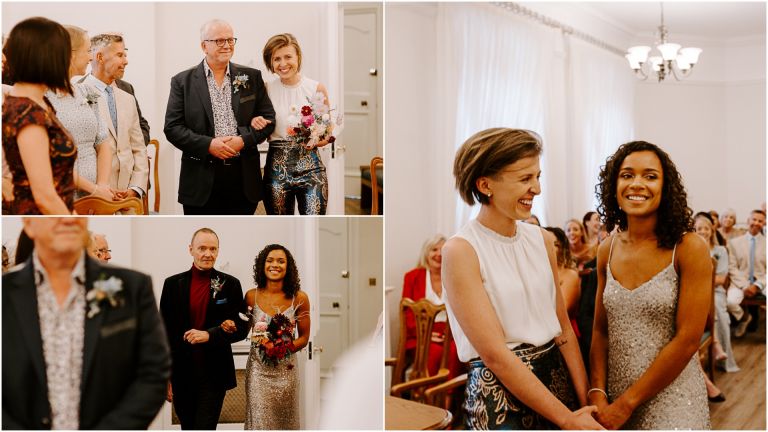 ‘Champagne Kisses’ played as both the girls walked down the aisle with their Dads. They nearly had me bawling just with that, I love Jessie Ware! There was a mixture of laughter and tears through the ceremony as Jo and Liz read their own vows. 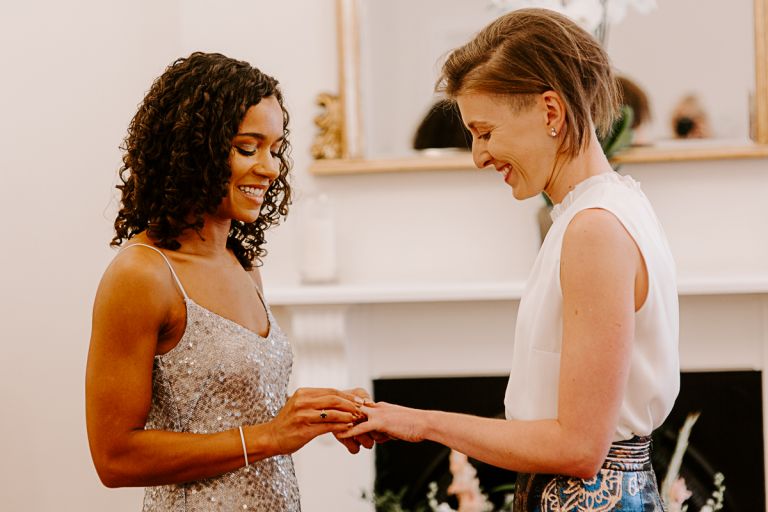 After the ceremony, we took the opportunity to do some photos in the atrium of the town hall. I’m so glad we managed to score a minute or two with the atrium empty. It meant I could get this iconic shot: 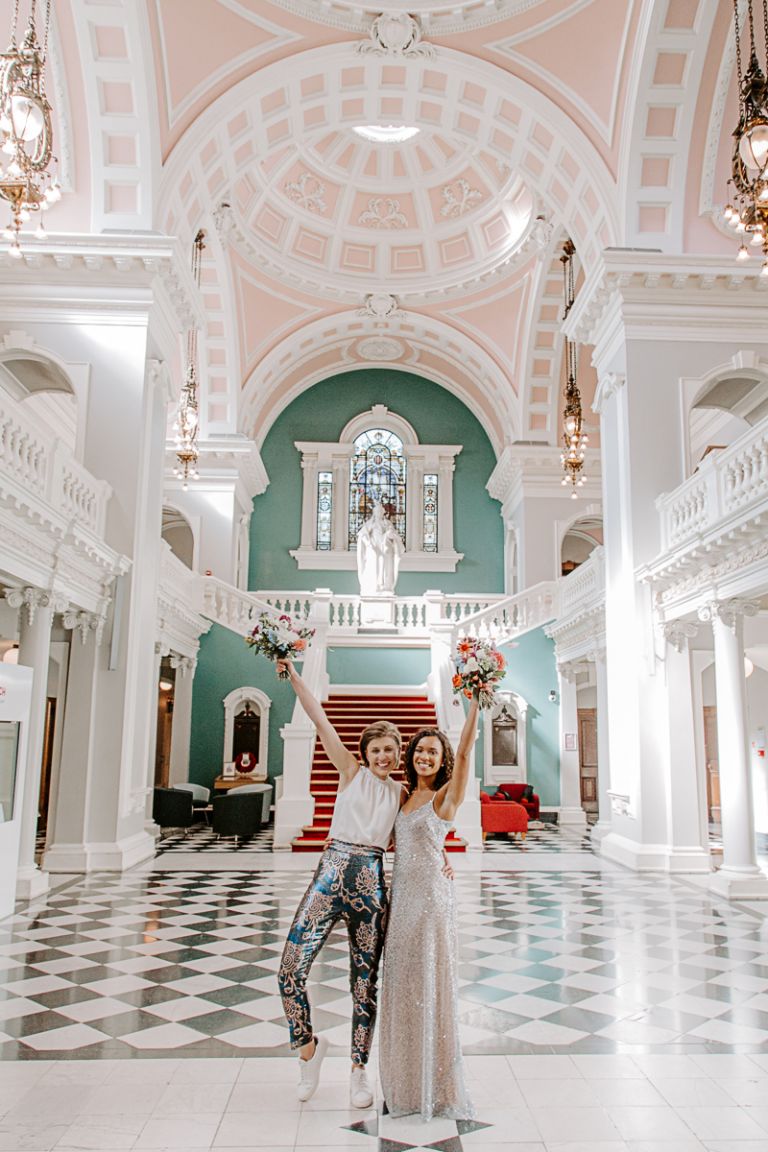 After throwing confetti on the steps of the town hall, everyone got on a bus to San Junipero, or in this case, One Friendly Place in Greenwich. 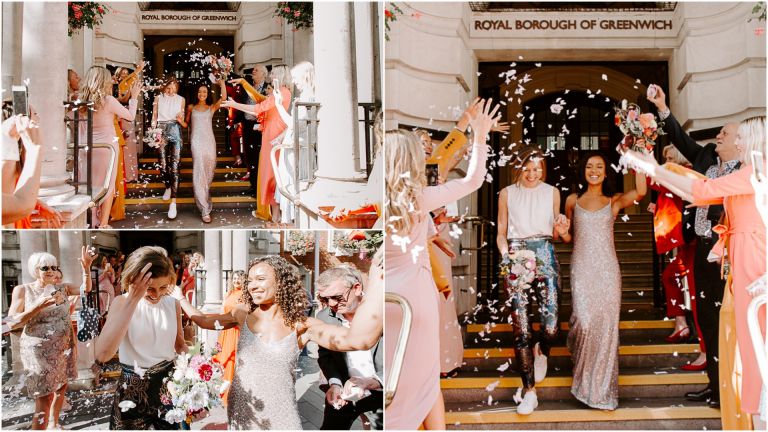 You’ve probably seen me blog about this venue before. One reason I love a One Friendly Place wedding is because this venue is just so versatile. I was super excited to see how Jo and Liz had put their own touches on it.

The San Junipero theme meant the cosy conservatory area had been decked out in an 80s photo booth complete with flamingos, palms and peacock chairs. I think this is one of my favourite shots of the whole day. It’s so different to what I would normally get as part of my couple’s portraits. But with a spot like this, what’s not to love? 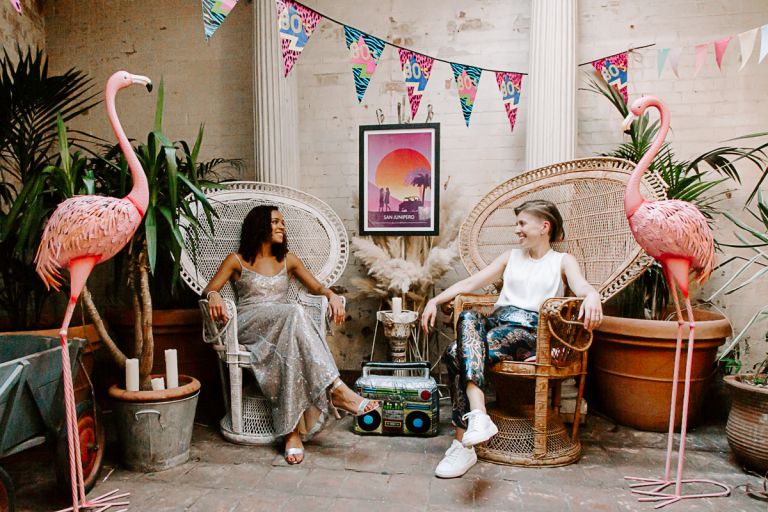 Underlying the decor was the theme of championing strong women and feminists. All the tables were named after feminists such as Phoebe Waller-Bridge and Barack Obama. This theme was also reflected in Jo & Liz’s reading during the ceremony. 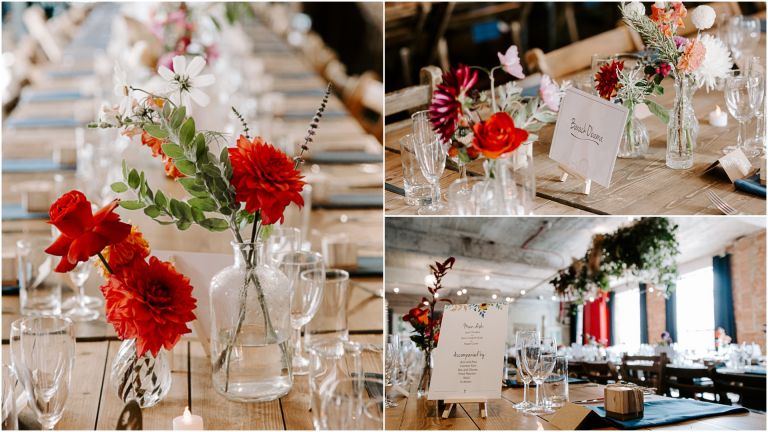 One of my Top 5 wedding trends this year is statement florals. Jo & Liz’s hanging florals in the dining room were a prime example of why they’re so great. They really added a focal piece to the room and added some textures. 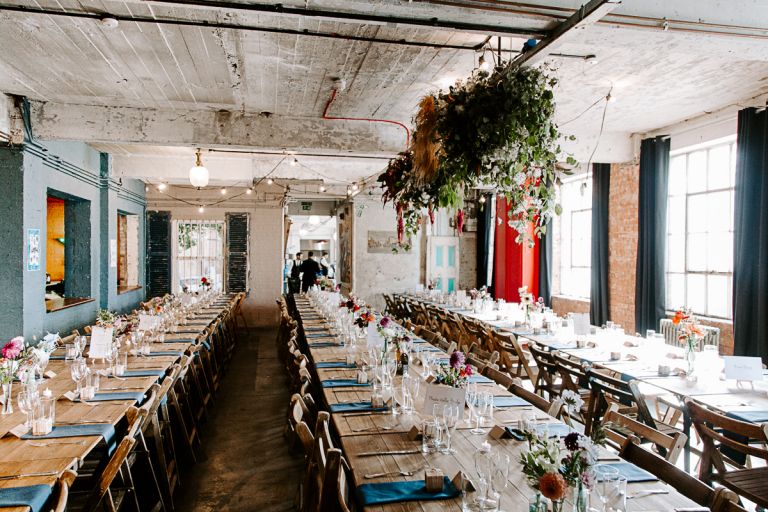 All the cakes were made by friends and family which was such a sweet touch (pun not intended). Everything looked so delicious and colourful, just like the rest of the day! I did try some of the rocky roads and I can confirm they were to die for.

Jo & Liz didn’t want too many portraits but did want to get some in front of the iconic Queen Elizabeth painting. I can’t believe how much love this image has got on Instagram! Thank you everyone! You can also see the feminist portraits next to Queen Liz. 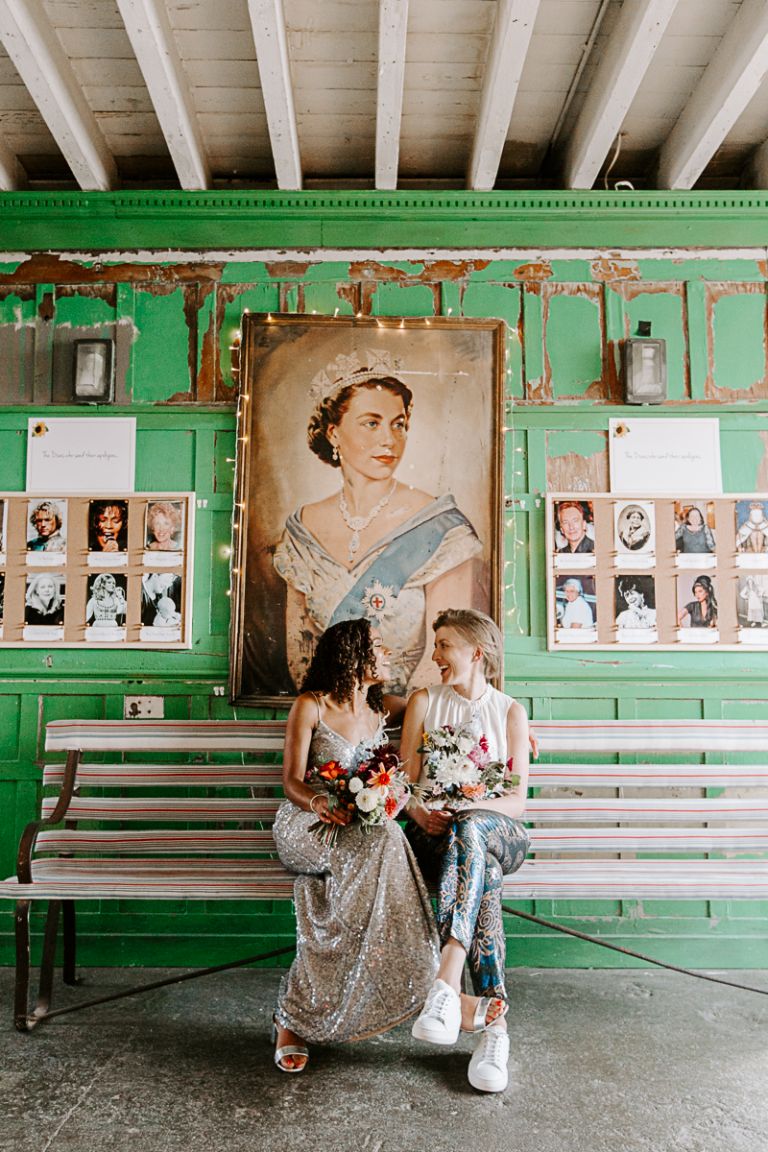 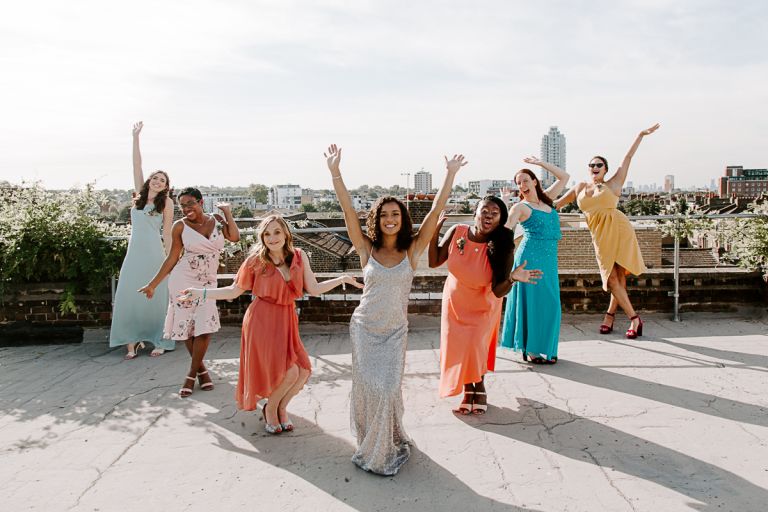 Instead of bridesmaids, Jo & Liz had brides babes and I adored their colourful mismatched outfits. Absolute wedding goals! I absolutely loved the opportunity to get some super fun shots of them all on the roof. 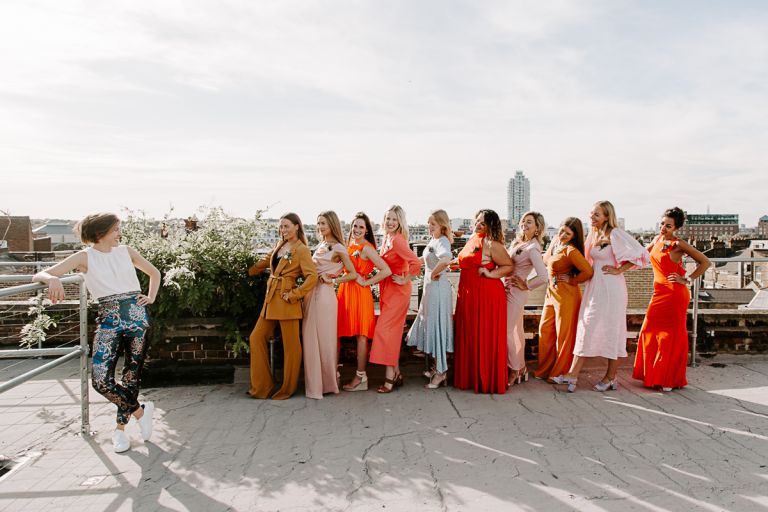 After getting some portraits and making the most of the sun, everyone headed inside for an alternative confetti throw. Jo & Liz decided to have a bubble walk instead which was so cool! They make such a great alternative and having it indoors really made for some interesting shots. This sequence of images just exudes joy. 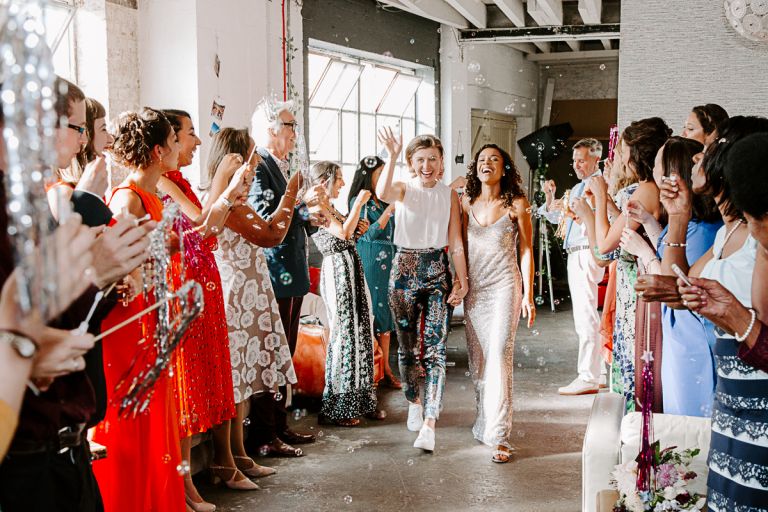 Speeches were spread on either side of the wedding breakfast and were mostly on the first floor, standing up. This was such a different way to how they’re usually done, but it was so nice to see everyone crowded around listening. Jo’s Grandma also did an inpromptu beautiful speech about her grand daughter. 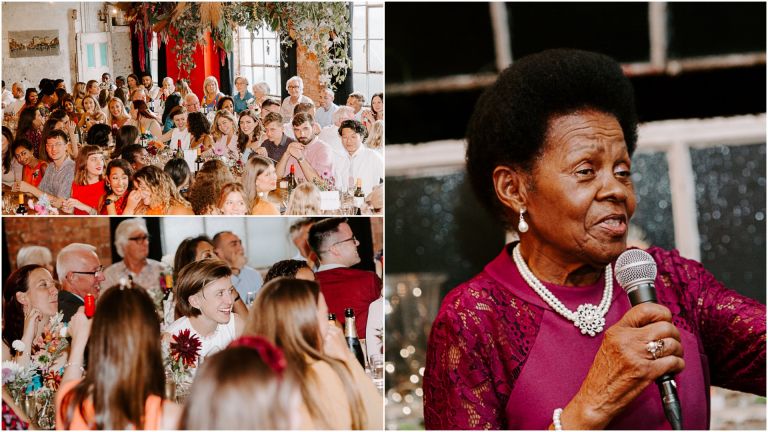 After speeches was piñata time! I always love pinatas because you think they would be fairly easy to break, but some how they always surprise everyone with how hardy they are! As a photographer, this makes for some fantastic candid shots. 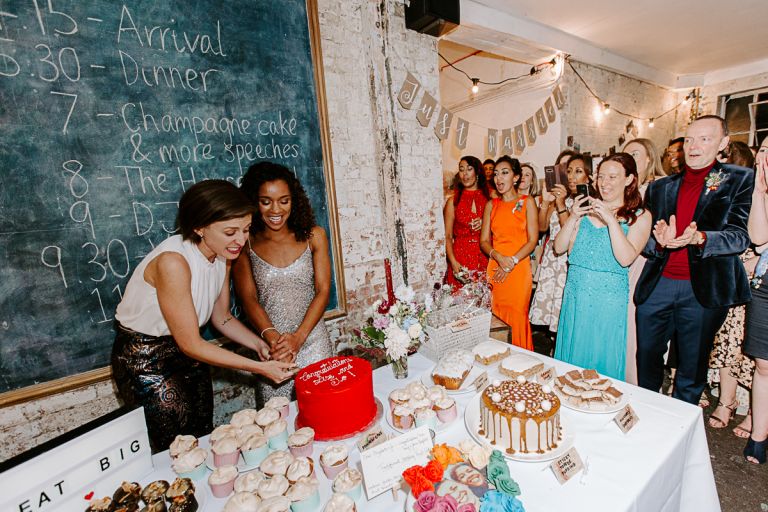 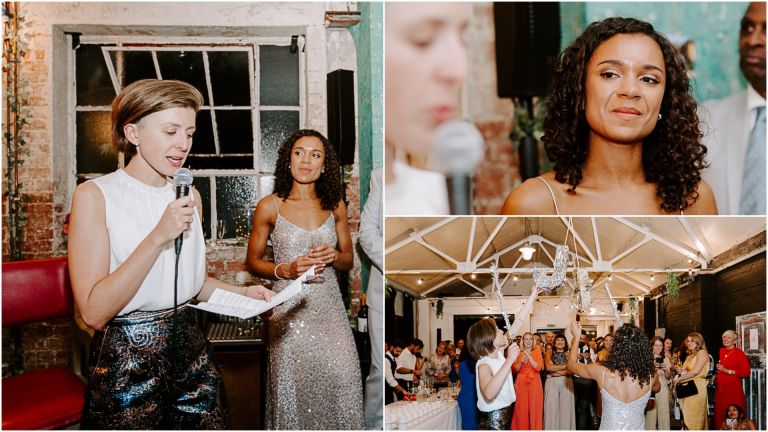 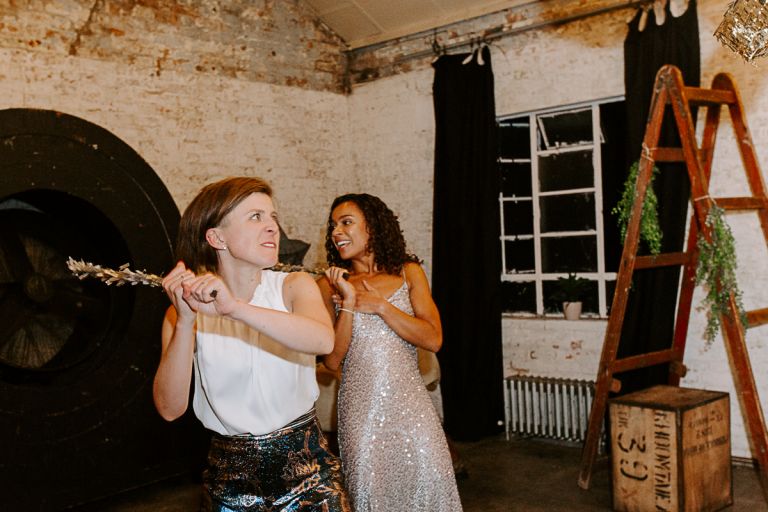 Little known to the guests, a big surprise was coming in the evening. Jo & Liz’s family would be making up the ‘House Band’ and performing as the evening entertainment! I’ve honestly never seen a dance floor so packed! It was hard just to squeeze in to get photos. Everyone was loving it! 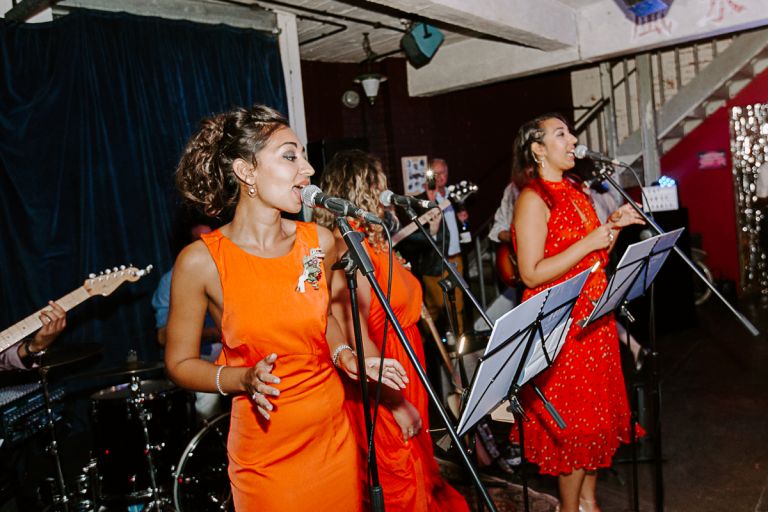 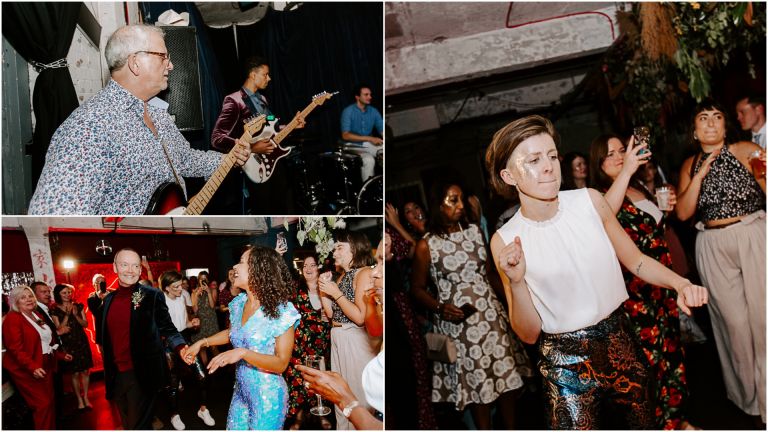 Liz’s sister also surprised Liz with the last song – a rendition of ‘Dreams’ by Gabrielle. All the brides babes joined in which was the sweetest surprise. 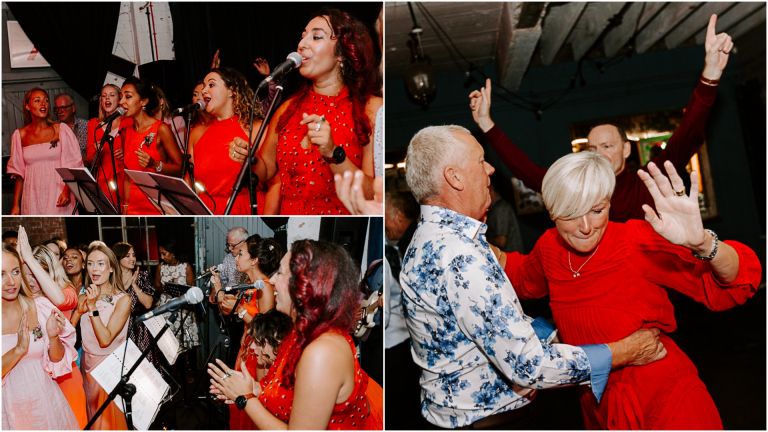 If you will be having a One Friendly Place wedding and are looking for a documentary wedding photographer in London, drop me an enquiry now! My 2020 and 2021 diaries are still open.

Thank you so much Rock N Roll bride for the feature! 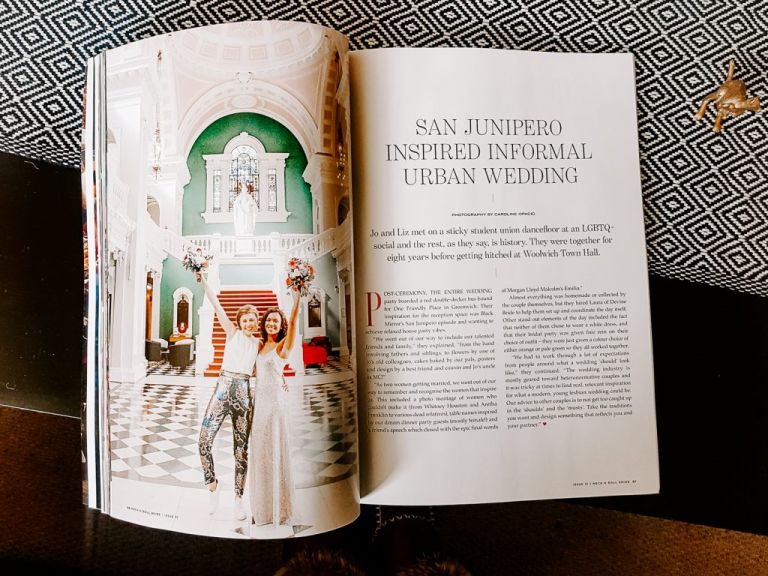 1 comment
« Essex Wedding Photographer: My Top 5 local Essex wedding venues
How To: The first steps to take when planning your Wedding »